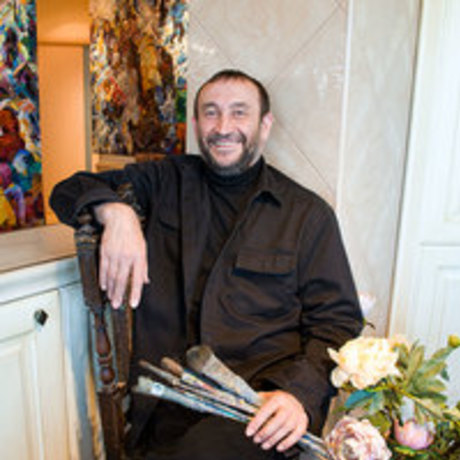 Alexander Ivanovitch Sheltunov (1951–2008) was born in the city of Komsomolsk-on-Amur. At the age of 15 he arrives in Irkutsk with his pillow, blanket, mattress and absolute assurance to enter Art School. Despite a great competition, he managed to enter from the first attempt. The place of studies’ choice was not accidental, as Irkutsk Art School was considered to be the best in Siberia and the Far East. His creative life started since that very moment.

He was inspired by the city spirit, communication with his friends and students of the same year. Indefatigable energy and ambition made him work hard. Sheltunov’s creative method was formed just precisely in Irkutsk, which is traditional in the finest and the most serious sense of the word: hard preparatory work at the endless open air in the city, environs, the Baikal, and then all collected material was deeply thought and processed at the studio.

Frequently masters either work all their lives in one technique and in one kind of visual arts or try to work in many different kinds and genres. But as for Alexander, his creativity seemed to have been split into two not equal parts according to the time: he was a graphic artist from the mid 70’s up to 2000 and first of all he was a watercolorist. From the early 2000’s, he was basically painting in oils only. His basic genres are landscape and still life. He had a pastose style of painting and a wide dab.

His latest works devoted to 350th Irkutsk anniversary are of a special interest. Sheltunov appeared as a completely mature master of painting in oils. We can see the works perfectly arranged from the point of colorful spots’ plastic art which adequately reproduce the artist’s thoughts and feelings. The master created a magic flashing and shining world of the city’s wooden architecture, the world which has transformed into the legend to a considerable degree. The legend is a favorite one especially by older generation citizens of Irkutsk. The legend which is all about outgoing dramatic and enjoyable, with plenty of confidence and hopes, full of creative activity time. It took more than half a century to figure out how to save an old, mostly wooden downtown. Meanwhile, this old city was gradually disappearing under the pressure of industrial architectural technologies. There has been a charming myth, a legend about a disappearing town and Alexander Sheltunov was probably one of the most outstanding and talented creator of this myth. His series of works devoted to the 350th Irkutsk anniversary is a royal gift to our city indeed.